East side of Central Plaza

Facing the statue is the East Gate, one of the most popular landmarks of Los Angeles’ Chinatown.  Y.C. Hong, the first Chinese American in Los Angeles to pass the bar, sponsored the gate. He was a community leader who spoke for the rights of immigrants before the state legislature and Congress.  The four large characters on the gate state, “The spirit of (Mother) Meng and (Mother) Ow” in tribute to Hong’s mother and to all mothers.

The statue of Dr. Sun Yat Sen, the founding father of the Republic of China, was erected in 1964.  He led the overthrow of the Manchu or Ching Dynasty Emperors in 1911.  His political ideals are summarized in a set of doctrines called “The Three Principles of the People.”  Ceremonies are conducted in front of the statue on the anniversaries of the Republic of China’s beginning, October 10th, 1911, and of Dr. Sun’s birth and death. 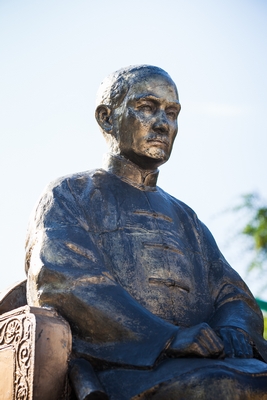 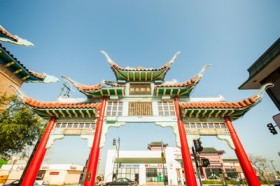