New Chinatown, considered the first planned Chinatown in the United States, opened in 1938 after the demolition of Historic Chinatown. It originally targeted tourists with various gift and antique stores but became a major restaurant and nightclub destination throughout the 1960’s. As the Chinese population expanded and relocated, design shops, offices, and residential units re-occupied many restaurants.

The oldest of the four gates in the plaza, the West Gate, was the stage for the 1938 parade and grand opening of New Chinatown. On top of the gate is a plaque with a four character motto by the Honorable T.K. Chang, the Chinese Consul of 1938, translated as “Cooperate to Achieve”. 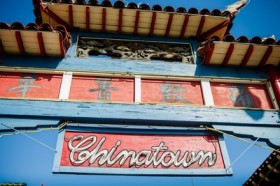