Audio: Marian Lee recounts her experience working in China City with her mom.

The “Shanghai Street” sign is one of the last remnants of China City and can be found in the secondary parking for Philippe the Original. Christine Sterlling, the founder of Olvera Street, envisioned China City as a location to promote tourism and to reestablish the displaced Chinese community and business from Old Chinatown.  China City was constructed using donated stage sets of a Chinese village from the 1937 MGM film, “The Good Earth.” Unfortunately, it was destroyed by a series of fires one decade later. 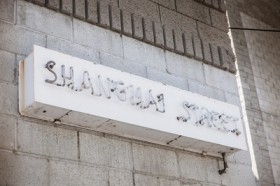