Even after the Chinese Massacre, people continued to move to Los Angeles for new opportunities.  By 1900, the Chinese population in Los Angeles’ core increased to approximately 3,000.

However, the Southern Pacific and other railroad companies, with support from the City of Los Angeles, acquired all the land east of Alameda, displaced Chinatown residents and businesses, and destroyed almost all structures to build Union Station.  Historic Chinatown was destroyed. Most of the remaining buildings were demolished in the 1950’s to make room for parking lots and on-ramps for the 101 freeway. 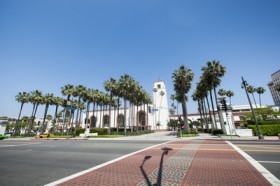