Audio: William Estrada details information regarding the Chinese Massacre of 1871.

Anti-Chinese sentiment rose because of increased immigration and employment of Chinese. Following the accidental shooting of one white male, a mob of 500 local white men killed 18 Chinese men and boys. Every perpetrator was eventually released due to prosecution errors. The Chinese Massacre highlights the intense racist sentiments against the Chinese and their uncertain existence in an era devoid of reliable law enforcement.

Several years later, Congress passed the Chinese Exclusion Act of  1882. The law prevented Chinese laborers from entering the country and was scheduled to terminate after ten years, but was extended in 1892 and 1902 and expanded to include all classes of Chinese immigrants. 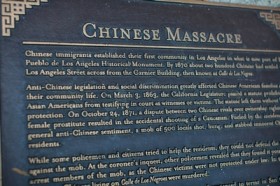